Still Angela is an unpredictable portrait of a contemporary Australian woman at 3 ages. On the cusp of her birthday, Angela goes on a real and imagined journey through time: up the garden path of her childhood into the kitchen with her lover, and onto a train that travels into the Simpson Desert. It is here that deep change can occur and she relocates herself within a wider landscape. The possibility and inevitability of change is recognized, and Angela realises and celebrates her life. Still Angela may be read as a modern fairy-tale, exploring the linear and cyclical nature of a woman’s life.
Colour Photography by JON GREEN. Black and white photography by Jeff Busby.

Still Angela was first produced by Playbox Theatre at the C.U.B. Malthouse, Melbourne, on the 10th of April 2002. Still Angela then toured Nationally with Performing Lines for MOBILE STATES in 2004. 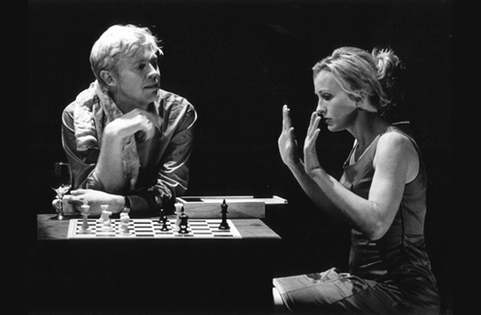 Still Angela explores the impact of both linear and cyclical time on our lives and offers the audience the possibility for meditation on our place within the larger context of the natural world. It is intended that Still Angela is, like a dream, available to become a location or landscape of possibilities from which to perceive your own meaning. Still Angela could perhaps be read as a contemporary fairy tale, which watches a woman in her late 30’s in transition.

The following notes were a response to a series of questions posed by Miriam Wells as a part of her research for her Bachelor of Creative Arts (Hons) thesis in the Faculty of Creative arts, School of Performance at the University of Wollongong.

I am interested in the relationship between the still body, silence and space.

It is Angela’s stasis or stopping which enables her movement forwards.

As it happens she propels herself forwards onto the moving train – and yet is able to remain still / silent – as she sits on the train.

But it is only a silencing of the social world – the desert is found to be full of life and sound.

First there is the sound of Angela herself which grows in scale as she steps into the vast space of the desert. She is unable to hold down all that sits within, and it surfaces and spreads.

In the production when Angela steps into the desert, sound occurs, this is at first the activity inside Angela, that emerges in response to the enormous space and silence of the desert.

Finally as the silence fills Angela and she fills it – an extensive act of sifting/sorting or re organizing occurs – the silence and space enable Angela to ‘lay out her world’ to finally re organize her relationship with self and the world. She can then begin to hear and receive the desert itself and a new sense of space and silence become possible.

As Angela is alone on the return train journey, the silence continues, and provides Angela with the space to ‘practice/fantasize’ and to ‘re-form’ her social voice.

The stopping has created space for ‘listening’ the premise in Still Angela is that what seems empty is in fact full. Like the desert Angela herself is full of life, but in order to feel it, she needs to stop and to listen, that is to face the possible ‘void’ or ‘emptiness’ within.

So the relationship between silence and space are crucial – silence creates space.

It is the space between the notes, the silence, which enables us to hear the note.

It is in the rhythm of nature, like Lake Eyre, being re-filled with water after a long cycle of drought.

Certain kinds of thought and language form best in silence.

To view Jenny Kemp’s Storyboard for Still Angela click here or alternatively click to enlarge the image below. 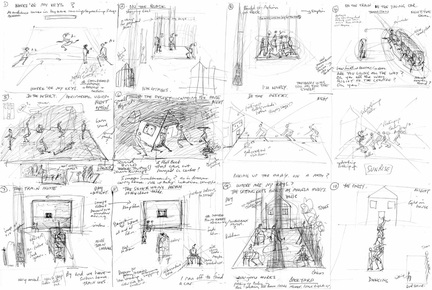 The following are excerpts selected by Jenny Kemp from an interview by Mary-Anne Robinson with the Still Angela creative team first published as “Still Angela: a slice of the girl” in RealTime 48 April/May, 2002. (used with kind permission of the author and RealTime). For full interview click here.

Kemp….We’re trying to get the rhythm of a transition or a catharsis or some inner work that might be taking place.

Warby ….We’re trying to get the rhythm of one character though four people and two languages – choreography and text.

Taylor… I’ve got to be conscious of the fact that I’m a memory and someone’s remembering me, I’m in a kitchen – am I remembering me? On the end I think I just have to be in the kitchen and the form and the content will support the idea…. It’s wonderful sometimes because you think, am I addressing all aspects of my personality and character? But it doesn’t matter because I’ve got three other people to do that from me, I don’t have to do it all.

Kemp….. It is actually Angela at three ages… the Angela’s three ages are mutable …. The younger self is still there as an older self is forming. We’re looking inside Angela and at the outside of Jack. In real terms there might only be one Angela sitting in a kitchen until she gets out and goes on a train journey. And the whole thing could be remembered. There are a number of grids that are activated…

Mills….the whole thing about the world of nature – rain and earth, mother and memory – there is this layering of meaning in the script that is really strong…. The play is looking at that shift towards autonomy and towards connection with place, or greater landscape. Not that that would cancel out connection with another person, but it’s opening up those possibilities. A kind of rite of passage.

Still Angela is written and directed with provocative flair by Kemp. It is steeped in femaleness…. Tickles us with Kemp’s collision of the banal and sublime, and relies heavily and effectively on the physical… the piece is witty and compelling: the balance of humour, lyricism and metaphor exciting.

“What’s new in Still Angela is a wicked playfulness…. Sit back, open your mind and allow the images and allusions, the products of Kemp’s fertile imagination, to simply wash over you. You’ll probably come away wishing, like me, that someone would stage a retrospective of all her original works.”

Sian Prior The Sunday Age.

From – Transfigured Stages by Margaret Hamilton

“As distinct from the horizontal time of linear narrative, Kemp has discussed her theatre in terms of a vertical time, similar to the idea of time standing still. She has referred to the Aboriginal concept of time as an “eternal now” that enables dreaming and unconscious states (Shifting and Sliding 2004). This evokes Steins notion of the “continuous present” of the landscape play, a composition ironically based upon a “beginning again and again”.
The absence of action is rendered explicit in the title of Kemp’s production and the opening image of a still ANGELA, an image that fascinated Kemp on the basis of its “undramatic” quality. (Shifting and Sliding 2004).” (Hamilton 2011: 98 & 105)