Remember avoids a linear narrative as it gradually reveals how the crime of rape impacts on the psyche of Moderna. The rape is not explicitly staged but the circumstances of the rape are replayed repeatedly across Moderna’s thoughts and memory, her imagination and dreams. The text shows how the bodily trauma of rape becomes central to Moderna’s consciousness as her inner distress continually intrudes on her social interactions. Moderna is embodied by two performers, her inner fantasies, Minoa and the Ancient Woman, are also personified.
Photography by JENNY KEMP

While Moderna is clearly in hospital after the rape and remembers herself in the kitchen prior to it, the manifest spaces of Moderna’s imagined surroundings overpower those of her daily life. …Remember suggests that the outer world is experienced as a projection of interior impressions and images, but the text does not explore individual psychology or offer an explanation of what motivates the characters. Instead, its personae float through the building described in the text as if they are performers in the set of Moderna’s imagination. They are performative parts of Moderna’s self, reproduced as if they have split away and become separate entities….Although this text depicts Moderna’s intense emotional reactions to being raped, it is not bleakly despairing. Moderna is terrified; but the final scene of relaxed casualness between Jack and Moderna implies that while she is greatly traumatised and changed by the rape, she is not defeated. The uncertain future of the relationship, however, is indicative of the way in which the long-term consequences of Moderna’s experience remain unknown.
(Taken from the introduction to Australian Women’s Drama – texts and feminisms ed. Peta Tait and Elizabeth Schafer pub. Currency Press, Sydney, 1997). 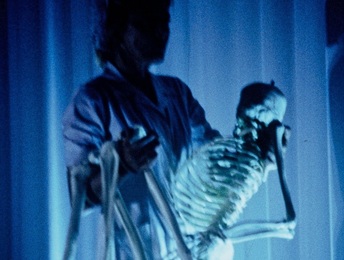 The design for the original production of Remember was based on the paintings of (Belgian artist) Paul Delvaux. A huge building spanned the back of the stage (see Delvaux’s Palace in Ruins, 1935). There were boulders on the earth ground. There was a door in the wall of the building near the kitchen which opened to reveal a naked doll and this was turned in circles by a handle.

The façade of the building shows the large window openings of five rooms, three upstairs and two downstairs. Upstage left, a small kitchen table and stool can be seen through a window opening, the middle bedroom window space is empty and there is a television in a lounge space upstairs stage right. In the foreground, stage right there is a hospital bed. A glass booth is behind the hospital bed with a night light. This is the nurse’s booth. Centre stage, there is a long path running down from the main doorway to the front edge of the stage. A fridge is stage left centre.

The action in this text provides only there starting point for rehearsals. It is intended that characters continually move through the main building as action on stage is taking place.

“This is a record of a performance text and in production Remember must be strongly visual, using image and movement to augment it’s meaning. It is crucial that the development of the visual text be the starting point for the rehearsal process and remain central to the final production.”
(Taken from the introduction to Australian Women’s Drama – texts and feminisms ed. Peta Tait and Elizabeth Schafer pub. Currency Press, Sydney, 1997). 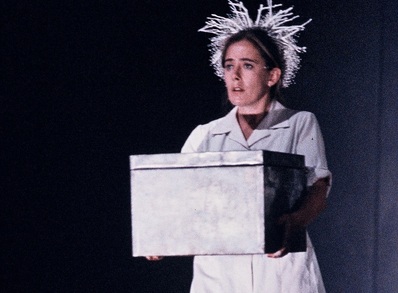 “Jenny Kemp’s fine performance piece, Remember, which was specifically characterised as “non-narrative”. Yet the fragmented episodes presented in different genres and from different perspectives in fact reinforced a very powerful narrative, and each new facet made the story more complete and more concrete in the spectator’s mind. The very dismemberment provided a wonderful demonstration of how we use narrative to convert experience into memory.”
Marie Mclean, Greenmill Dance Project Papers, 1994

“A mixture of both contemporary opera and drama, Remember combines both superb acting and singing to create a highly original performance…. You will be impressed by the strength of the human spirit.”
Angela Geylyswyn, The Swine

“A compelling piece of theatre; highly charged, emotional, haunting in so many ways….The experience has reminded me about the tremendous possibilities for theatre to re-awaken and re-enliven us….despite the bleakness at its heart, it is a play of considerable grace and aesthetic beauty.”
Hilary Glow, 1993, AFC

“I thought it was a truly splendid work… it added to my consciousness.”
Liz Jones, La Mama Theatre.

“What impressed and moved me was… the sense of a unified expanding stage mind that all the work together generated… it became truly associative and the show itself an invitation to enter a broad and thrilling landscape.”
Julian Meyrick, Kickhouse Theatre, 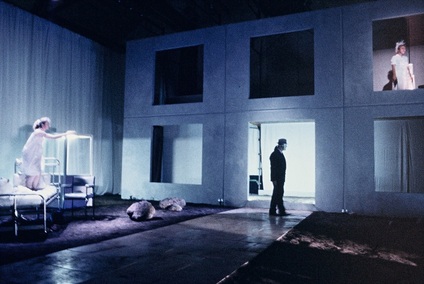 “Remember does not ‘remember’ the rape to claim that a private refusal of if its power in a patriarchal society changes reality. Instead the play works to actively allow the memory to return tin order to undertake and justify the process of recovery. As a narrative consequence, the play controversially gives the female subject responsibility for addressing the psychic and corporeal effects of rape because it is her body that must learn and unlearn the damage done. Remember imagines therefore a process of feminine reintegration in relation to sexual difference after rape. But this healing process does not imply cooperation with male power in a sexist society. The apparent disappearance of the crime of rape in a juridical sense is replaced with a performance that is full of suggestions for other possible endings.” (Fensham 2005: 86)