Call of the Wild

‘Call of the Wild’ examines the process of living, in particular the way a young woman and mother inhabits her world. It seeks to explore the activity and creativity of the female psyche.

The play recognizes her continual interplay between inner and outer worlds, between past and present, fear and desire, and the actual and the imaginary. The text is the voice of the young woman: her learned, imagined, remembered and unspoken voices, and the voice of her desire.
Black and white photography by BRANCO GAICA. Colour photography by JENNY KEMP

Time stands still as the woman sits in her small sitting room full of despair and desire. The play is located in a landscape which may be the inner landscape of the woman, but which also is an actual place of earth, trees and architecture. There are four women who all represent the one woman and there is one man, who exists both within and outside the woman herself.

Time travels slowly as the woman moves forward, backwards, sideways, downwards and gradually forwards to a location of momentary clarity.

I have always been fascinated with the inner life of the psyche. And in particular its relationship with the ordinary, everyday world. As one walks down the street one sees the ordinary world, but experiences both the street and the inner world of memory, imagination, fantasy, emotion and dream, that my work attempts a dialogue. One could say it is an investigation into the psyche and its ability to function creatively in a modern world.

Call Of The Wild is mainly about women and women’s consciousness. The four women are, in a sense, all one woman – they are not characters as such, but represent states of being. The man is both separate and belongs to the woman (both as a figure within and without). Throughout the performance, slides, projecting sentences from the text were seen (at various intervals) above the actors.

The initial stage of the visual text was written in storyboard form by using the architecture, spatial dynamics, images and costumes from the paintings of Paul Delvaux (four in particular as mentioned in the text). It is intended that the mise-en-scène operate independently of the text and in juxtaposition to the meaning, with various actions often occuring simultaneously. Stillness/image and spatial dynamics always play as important a part as action.

The paintings, for me, represent, landscapes of the soul. They have a timelessness in which the figures appear to be inside a dream or a reverie of some kind. They are inhabited mainly by naked or partially naked women and a few men, mostly appearing in suits. Both the nakedness (representing for me an interior world, vulnerability, openness, and physical presence) and the number of women is appropriate as a trigger point for the ‘dreaming’ of the visual text. For each of the visual texts of three of my plays I have worked from these paintings.

Key visual factors for this production are the partial nakedness of the women (sometimes the man), the none naturalistic setting, the use of natural elements of earth and trees, a small realistic sitting room above the stage area, and a skeleton. Call Of The Wild is second in a series of four works over the last decade exploring these concerns: Goodnight Sweet Dreams (1986), Call Of The Wild (1988), Remember (1990), The Black Sequin Dress (1996). 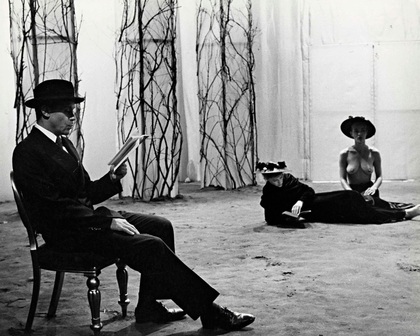 The Aural text was composed from within the discourses of feminism and popular culture. It was continuous, layering discrete scenes and elements which occurred simultaneously with the written text. Influenced by the vocal compositions of Luciano Berio, I developed scenarios with the actors which involved doubling and multiplying the voices and adding simultaneous action. The idea of the co-presence of discontinuous elements. A recurrent patterning in which the recognition of meaning was endlessly delayed. As if you have been positioned in relation to a number of mirrors, all of which can be moved. To view another mirror, you turn away from yourself. One person, existing within several realities. 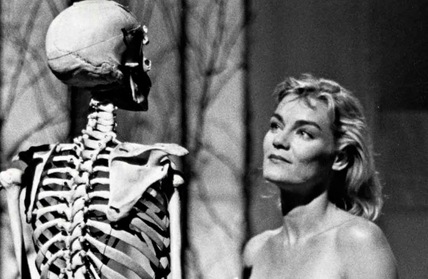 “… a work of formal originality and class an imaginative flight, which soars way above what most of us are used to in Australian theatre.”

“Elizabeth Drake’s innovative music, using the human voice as a major instrument is an integral part of the experience…”

“Call of the Wild is totally surprising, representing a radical challenge to normative gender roles as much in its unconventional dramatic presentation as its message..”

“Visionary new play. ‘Call of the Wild”, a superb study of female empowerment”

“an impressively coherent production, a vital merging of theatrical elements… lucid, compelling and above all entertaining.”

“Elizabeth Drake’s sound is central to Call of then Wild. Layered like a filo pastry, it completes rather than frames the on-stage picture…. The production is confronting, audaciously nonconformist and utterly transfixing…. Jacqueline Everitt’s visually compelling set… forms an aptly ethereal precinct in which the actors patrol the darker corners of the psyche.”

“Call of the Wild provides a first draft for the distinctive features of Kemp’s dramaturgy and introduces her thematic preoccupations for the subsequent body of work. Theatrical conventions established at this early stage include the multiplicities of the female subject; the shifting modes of textual register and an accompanying vocal choreography; the juxtaposition of myth, history and present reality in the design of the stage world, and the specific ontology of things (stage props, costumes, objects).” (Fensham 2005: 79)