“Kitten – a bi-polar soap trip – opera
A drama in three acts:  from tragic, to manic, to sonic
The tale of a Contemporary Icarus.”

Kitten’s husband Jonah has disappeared. Kitten is overwhelmed with grief and guilt. She plummets. She wants to die. Kitten finds herself on the edge of herself and literally on the edge of a cliff, dreading what she might find. From this darkest place of pain Kitten struggles to speak – to find a language to express what feels inexpressible to her.

A battle ensues between Kitten’s destructive and creative impulses.

Manfred Jonah’s friend and rival, whose feelings for Kitten have no doubt contributed to the husband’s suicide, struggles to manage the desperate and difficult situation he finds himself in. He is in love with his best friend’s wife. His friend has disappeared. No body has been found, and Kitten is losing control.

What can he do?

The shock of the suicide has caused a major downward spiral in Kitten. From the depths of despair, she finally she tunes in and discovers what her husband has been working on. She literally begins to ‘listen’ again and discovers the power of the natural world.

It is from here that her new path begins.  Her mood swings upwards as she develops a wild hope that he is still alive and an extraordinary plan to rescue him. She begins to soar like a contemporary Icarus into a full blown mania, which finally culminates in a spectacular and psychotic crash landing.

Once again Kitten is reduced to nothing. And from her hospital bed, she very slowly begins to rediscover her lost ability to sing….

Kitten asks three questions.
1.    How do we deal with suicide?
2.    How do we deal with insanity?
3.    What is our relationship with the natural world?
And proposes three answers.
1.    The human imagination can be a  powerful, healing force.
2.    To find language or expression is a necessity for healthy survival.
3.    We benefit from remaining in tune with and protecting the natural world.

The play looks at two people struggling with these increasingly frequent yet still socially taboo areas. Because Bi Polar Disorder is an illness that causes a disregard for the normal emotional boundaries, Kitten’s herself is intended as a kind of ‘emotional shaman’ for the audience, taking them on a roller coaster ride, to extremes they may seldom contemplate.
A journey against which they may measure their sanity.
The play is also tracking our organic connectedness to the natural world, and exploring the
way the natural world gives expression to and communicates through a variety of intelligences.
The play attempts to capture the Bi-Polar experience in it’s form as well as content. This is achieved by the externalising of the internal experience of Kitten. This is further augmented by the character of Kitten being played by three performers.

Article on : On the Edge Project

The On the Edge Series of Kitten and Madeleine explore the world of mental illness ascribing to the afflicted subject a poetic truth that validates them as human beings even as they live outside the framework of everyday life.

What gives coherence to Kemp’s body of work for the theatre is a commitment to intensity, to an uncompromising vision and a determination to keep the work process evolving. She represents in a concentrated and meticulous way the energy, imagination and critical awareness of the sixties as well as its extremes and its daring. Her politics of liberation has centered around freeing the unconscious from social restraint. She is a major artist who has gone all the way with art and has the distinction of being the only female playwright to emerge from the APG era.’

Kitten premiered in the Beckett Theatre CUB Malthouse, Melbourne, from the 8th to the 23rd of October, 2008, as part of the 2008 Melbourne International Arts Festival. 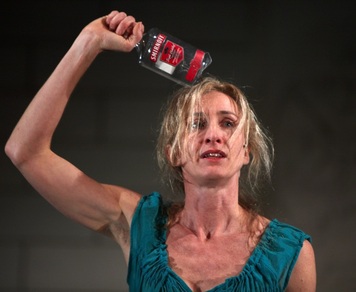 For a number of years I have been thinking about the myth of Icarus, the tale of the boy who flies too high while trying to escape, gets burnt by the sun and falls into the sea. I wanted to look at flying high and falling. What is it? What can cause it? What happens when we fall? And what positive action can emerge? With KITTEN I have looked at how this dynamic might unfold in a woman who is pushed to extremes by a traumatic event. I wanted to explore what it is that causes the turning points in her journey and what changes might take place in her as a result.

We get the most out of life awakening to the world to its vastness, its beauty, its endless communicativeness. The life of the individual is not so much narrative structure as poetic: it is not a tale with a beginning middle and end but it is rather constituted through address.
Freya Mathews: Reinhabiting Reality – Towards a Recovery of Culture.

Each person carries around in himself a terrible other world of hell and the unknown. It is an enormous pit reaching below the deepest crater of the earth, or it is the thinnest air far beyond the moon.
Patricia Highsmith: Beautiful Shadow – A life of Patricia Highsmith.

My attraction to movement lies in many directions – the kick of rhythm, the reassuring power of breath and the capacity to inhabit the physical realm through a deep imagination. The aim through the process has been for all this, plus an energized, available, three dimensional figure able to embody the physical storytelling with clarity and easy precision.
Helen Herbertson

There are three formal design frames, each in some way a reflection of the others. In narrative terms the first is atop a cliff; in staging it is the bottom of the sea. Kitten is at her most metaphorically at sea. In part two – she is now in search of something other (something less tangible: her own voice), yet is the most staged in reality. But, as with our own reality, this world is dense and in its own way submerged in electrical energy. It is temporally confused by recordings of the past and projections into the future. It part three Kitten begins to land and, over time, reacquaints herself with herself. This world, as reality reasserts itself, is the inverse of the first. It is the most made of dream; time is truly slipping and we swim in Kitten’s music.
Anna Tregloan. 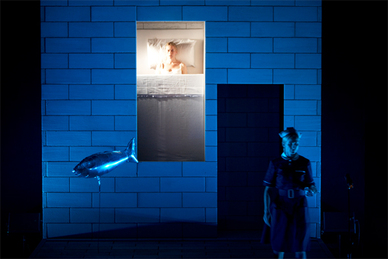 The full script of Kitten is available from AustralianPlays.org

“In Kitten, Jenny Kemp and her design collaborator, artist Anna Tregloan, deliver a finely crafted, highly intelligent work, created in response to a joint commission of the Melbourne International Festival, Malthouse Theatre and Black Sequin Productions. This is a play that drills deeply, focusing on exploring one female character in great depth to the expense (at last perhaps!) of male characters. We find a mind worn thin in crisis. Kitten can imagine her splendid deliverance and we hope – and sing – with her. But we might also suspect that life’s attritions have robbed her of the means to be whole.

“Kitten is a sophisticated and comprehensive theatrical production. It employs many story-telling techniques which compel and compound. Jenny Kemp’s writing oscillates between eloquence and coarseness as the audience becomes privy to Kitten’s stream of consciousness, her dialogues with Manfred, played by Christopher Connelly, Jonah and herself. The character of Kitten is embodied by three actors; Natasha Herbert, Kate Kendall and Margaret Mills. As the play unfolds, Herbert, Kendall and Mills remain onstage simultaneously, embellishing various facets of Kitten’s psyche with synchronicity and detail…. Jenny Kemp’s Kitten  is a unique piece of theatre. As Kitten’s journey evolves and her ‘reality reasserts itself’, music becomes the channel for communicating her transformation. Kendall provides a distinguished performance singing a variety of songs with depth and expertise. Kitten is a production which benefits greatly from the quality of its actors and the intricacies of Kemp’s writing, which realistically creates a subterranean world of despair, but challenges its characters to chart a course out of it as well.”

“Jenny Kemp’s latest work, Kitten, draws inspiration from the story of Icarus. The wax and feathers are gone, replaced by neoprene and microphones, and Kemp’s fascination lies not with the youthful curiosity of Icarus nor with the natty craftsmanship of Daedalus, but with the narrative dynamic suspense of the myth, its freefalling verticality…. Kemp is not interested in the narrative suspense of the search, but on the other hand, neither is she interested in the relationships. The only driving force behind Kitten  is the internal life of the eponymous character…. In the end, Kitten’s freefall takes her, and the audience, from the thick, submerged world of the first act, through the temperate naturalism of the second act into the stark, clinical clarity of a psychiatric ward. At this point, jumping into a liminal space of polar bears and inflated tuna, Kitten performs a concert. Kemp stays true to her inversion of the Icarian arc and finishes with this theatrical parachute, a floating denouement, where the audience leaves the theatre to find themselves in Crete.”

From – Radical Visions by Denise Varney

“Kemp’s work has always communicated through a highly elaborated scenography in which the mis-en-scene signifies and comments on the subject’s state of mind. But in Kitten, there is a shift towards the natural world with the physical environment as an active force that the subject finds troubling and empowering. The subject’s states of mind are articulated as a relation to environment, as if to say that the interior is no longer the sole source or origin of affect. Hence perception, feeling, language and action are as much ecological effects as they are social, psychological or unconscious.” (Varney 2011: 229)

From – Transfigured Stages by Margaret Hamilton

“Kemp’s theatre can be thought of as reconfiguring the “play” to create open spaces or landscapes for the psyche and in Kitten this manifests in a scenographic text that privileged imaginings of natural spaces and/or states that craft their own laws. This is dominated by the unpredictable sea, which emphasised the metaphorical ambiguity of the stage.” (Hamilton 2011: 112)
Home    Projects    Further Reading    People    DVDs    Contacts